Once upon a time (like... six years ago), I did year-in-review posts for the state of my LEGO collection here. It's getting to be a while since 2018 ended, but not quite so long that I don't want to put one up, having just stumbled on the old ones.

LEGO Set of the Year:

The last time I did one of these, 9472 Attack on Weathertop was brand new and my selection for this honour. A lot of water has swept under the bridge since then. I never did get the big sets in The Lord of the Rings theme.

2018 was not much of a sets-prominent year for me, and most of the sets I bought were somewhat swiftly parted. The most striking set was one that I didn't buy for myself and probably wouldn't have bought for myself: 75952 Newt's Case of Magical Creatures, a Christmas gift from my in-laws.

I'm a Harry Potter fan, but not to the extent I'm a Tolkien fan, and even as a Harry Potter fan, I've never been into Harry Potter LEGO, so Fantastic Beasts and Where to Find Them as a source of LEGO sets has never been something I've definitely needed. This set is really well-built, however: a dense collection of parts (for its size, the box it came in is one of the heaviest I remember) in an attractive form. Building a playset that folds into an actual case is clever, and I like the animals. Despite having NO prior need to have a Potterverse set built in my collection, this one is actually staying.

LEGO Theme of the Year:

This is a hard category to nominate. In terms of sets purchased, Star Wars and Nexo Knights were far and away the numerical leaders, but Star Wars was mostly battle-packs riding a wave of nostalgia more appropriately alloted to 2017 (when I first, belatedly, watched The Clone Wars and then Rebels), and Nexo Knights is misleading, since it's mostly deeply discounted accessory sets.

Outside of buying new sets, I didn't do much MOCing, excepting temporary things for various webcomics. Even here, Android Files took place largely in the wild, with no clear leader for intervening themes between Adventurers, Wild West, Arctic, and Alpha Team. My other comics and pictures on Flickr reveal no dominant interests.

So, what was new in 2018? Filtering my purchases on my master spreadsheet (because, yeah, I keep track of a LOT of things...), City was the only theme other than Star Wars that I bought multiple 2018 releases in. And these were a bit more substantial than battlepacks.

It's a victor by default, though.

LEGO Minifig of the Year:

It's also hard to name a Minifig of the Year. Though my LEGO time was somewhat sporadic and largely webcomic focusing, there's always some fig-fiddling going on, but if we look at what cropped up on my irregular Flickr account, we don't see a predominant theme or a prominent fig taking centre stage. 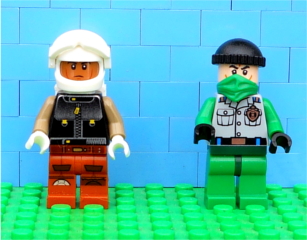 If someone must be named, then we'll look at the gentleman on the left: one of many Evil Peachies, his ever-changing nature as torsos, arms, hands, and more get cycled in and out of as new figs are added to the collection has made this former Naboo Royal Guard (he hails from the more recent Flash Speeder set) a much built-and-rebuilt fig over the past year, which was the main way that a fig could hope to achieve attention.
Posted by Formendacil at 7:37 PM

This is a somewhat random, idiosyncratic LEGO(r) fan blog, and it is not supported or endorsed by the LEGO(r) Group. I receive no material or financial support from this endeavour, although I get mental pleasure--one might say catharsis--from doing so.